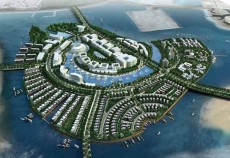 In March, CW reported that Ithmaar Development Company (IDC), subsidiary of Ithmaar Bank and developer of the man-made island, had awarded the first phase infrastructure contract to Cebarco Bahrain.

During the recent ceremony at the island site Shaikh Khalid unveiled a commemorative sculpture to mark the formal start of the first phase of infrastructure works.

Mohammed Khalil Alsayed, IDC’s CEO, said: “I am delighted to announce that the pioneering Dilmunia Island has reached this critical milestone in its project development. This milestone has significant and far-reaching implications for the Kingdom of Bahrain. It will, for example, help create potentially thousands of new jobs both directly and indirectly, bolstering the Kingdom’s key construction, real estate and tourism industries.”

Dilmunia island, already out of the waters off the coast of Muharraq, has a health anchor, but will also include residences and retail in a resort-styled environment.